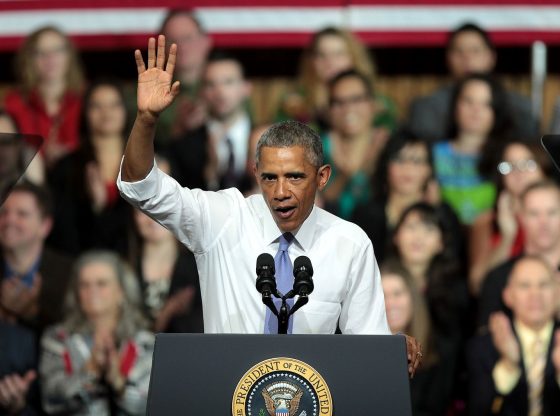 Photo by Gage Skidmore
BY: Deroy Murdock | News |
Advertisement
MAKE Sure you are Registered to Vote for TRUMP [CHECK HERE]

As the Paycheck Protection Program (PPP) prepared to launch last Friday — to transport loans (some forgivable) to small businesses slammed by COVID-19 — the president’s critics were quick to predict its failure. And their metaphor for its expected rocky debut was, what a surprise, totally inappropriate.

“There is also significant concern that the process and portals created to manage the loan demand will crash over the course of Friday,” CNN claimed. “This has a very Obamacare website rollout feel to it,”

“The potential failure to deliver small business aid as promised — one of the first big rollouts from the [COVID-rescue] legislation — could deal a major blow to public confidence as a crippling recession looms,” Politico trembled. “Some fear a disaster that could dwarf the failed kickoff of the Obamacare enrollment web site in 2013.”

ObamaCare? Let’s not go there.

The $2.2 trillion ‘‘Coronavirus Aid, Relief, and Economic Security Act’’ or ‘‘CARES Act” is the legislation that undergirds PPP. President Trump signed it on March 27 — two Friday afternoons ago. He would have approved it on March 22, if House Speaker Nancy Pelosi (D – California) had not been shilling for the musician-hating Kennedy Center, scrounging for windmill subsidies, and trying to ban voter ID cards. She handcuffed Washington for five full days (an entire work week!) while she pounded her fist on the negotiating table and demanded her far-Left ransom. Luckily, Republicans gave her relative crumbs.

Despite all of this, the PPP website got airborne within one week of the president’s signature. Rather than the aviation disaster that the Trump haters predicted, PPP landed on schedule.

The Small Business Administration reported that it approved 17,503 loans worth some $5.4 billion as of 7:30 p.m. Eastern time last Friday. This afternoon, Team Trump updated its arrival board: 3,000 community, regional, and national banks have authorized 225,000 loans totaling $70 billion. So, Friday’s performance has grown 13-fold, and about 20 percent of PPP funds now have been distributed.

“The speed with which the administration stood up this program is an incredible feat, but it’s also important for a little patience and a little honesty,” said U.S. Senate Small Business and Entrepreneurship Committee chairman Marco Rubio (R – Florida). Last Saturday, he noted several potholes in the runway whose absence would have allowed PPP a softer landing. “When you launch something this unprecedented and far-reaching just seven days after it becomes law, there will inevitably be problems. The good news is that every problem we saw yesterday can be fixed. I am on the phone constantly with Treasury, the SBA, and bankers across the country and all across Florida to make sure it gets better each day we move forward.”

As more banks enter the program, loans are extended to new customers (not just existing ones), and rules are clarified on using 1099s as proof of payroll expenses, PPP should operate even more smoothly.

Now, compare this with opening day for ObamaCare.

Healthcare.gov flopped, big league, despite three and a half years to get it right. Obama signed ObamaCare into law on March 23, 2010. The ObamaCare website premiered on October 1, 2013. That’s 3.5 years and one week. After that much time — nearly the duration of a college education or 88 percent of a full presidential term — the damn thing at least should have turned on. Instead, it just stood there.

Americans were shocked to see Obama’s signature program unveiled and then devolve in a PC’s blue screen of death. Early sign-ups trickled in, if that, for days, as potential ObamaCare enrollees struggled to access the website. HealthCare.gov was infested with more bugs than an anthill.

PPP and its sign-up website got underway in the same time as that extra week between Obamacare’s 3.5-year birthday and the launch of Healthcare.gov. Obamacare had 3.5 years to take off like a Boeing Dreamliner, and yet it conked out, just as it departed the jetway.

These two initiatives do not compare. And the sooner Trumpophobes make their next whine selection, the better.