The Ballad of Bubba Wallace is More Upbeat Than it Sounds 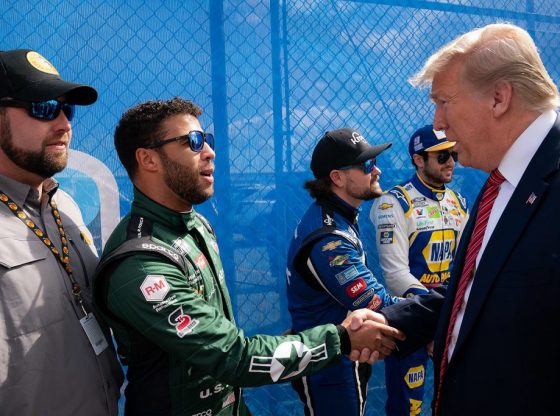 NEW YORK — When the Beatles sang “Hey Jude,” they urged mankind to “take a sad song and make it better.” The Bubba Wallace case finds liberals reversing these whispered words of wisdom. They took a better song and made it sad.

Fifteen FBI agents rushed to Alabama’s Talladega Superspeedway Monday to determine if a hate criminal placed a noose in the garage stall of NASCAR driver Bubba Wallace, the sport’s only top-level black driver.

The 15 G-Men found that the rope of interest has opened and closed a garage door since last October. The FBI added: “Although the noose is now known to have been in garage number 4 in 2019, nobody could have known Mr. Wallace would be assigned to garage number 4 last week.”

Rather than celebrate this racial false alarm, some Leftists still call this racism.

ESPN host Jacoby declared via Twitter: “I don’t care what the FBI says, this is a noose and a hate crime.”

“It. Was. A. Noose,” sportscaster Jemele Hill wrote on Twitter. “They just don’t believe it was directed at Bubba Wallace.” So, the noose was aimed at a white driver?

“I do not think that we’ve seen closure in this particular inquiry,” ethnoöpportunist Al Sharpton told MSNBC. Shifting his paranoia into fifth gear, he wondered: “Did someone know that it was in the stall when they did belatedly assign Bubba there?”

If NASCAR really were driven by Caucasian racists, they smugly would have stayed quiet or perhaps instructed Wallace, “Take a hint: Keep NASCAR white!”

The 180-degree opposite happened: “The Ballad of Bubba Wallace” turned upbeat.

As an organization, NASCAR stood firmly behind Wallace. “There is no place for racism in NASCAR,” the group declared. Earlier this month, it accepted Wallace’s request and banned Confederate flags from its events.

And in a moving display of anti-racism, hundreds of NASCAR drivers and crew members pushed Wallace’s car down the Talladega track, and marched behind it, in an overwhelming show of solidarity — not with the supposed noosemaker, but with Bubba Wallace.

There are three morals to this story:

First, rather than let investigators establish the facts, too many people instantly scream, “Racism!” and then look like idiots when perfectly innocent explanations emerge.

In January 2017, a Bowling Green State student reported a Ku Klux Klan meeting in full swing when she perceived a white sheet inside a campus classroom. The university’s president announced the next day: “We discovered it’s a cover on a piece of lab equipment.”

Last week, Mayor Libby Schaaf (D – Oakland, California) complained that five nooses were hanging from a tree in a local park. In fact, Victor Sengbe placed five ropes with handles in the tree, back in April. Why? So visitors could use them for exercise. Nonetheless, Mayor Schaaf slammed Sengbe, who is black. “Intentions don’t matter when it comes to terrorizing the public,” she barked.

George Floyd’s excruciating death beneath the knee of Minneapolis ex-cop Derek Chauvin triggered weeks of massive protests and denunciation of racism from individuals to corporations.

Third, the glass of racism is far, far less than half full. It likely is down to the last swig. And yet Left-wing activists, media figures, and elected Democrats act as if it’s overflowing like Old Faithful. These malefactors thrive on racial tension, and are not happy unless they can pit blacks and whites against each other. And if this scares black voters into voting Democrat and booting Donald J. Trump from the White House, even better.

We shall overcome? That’s the last thing they want.