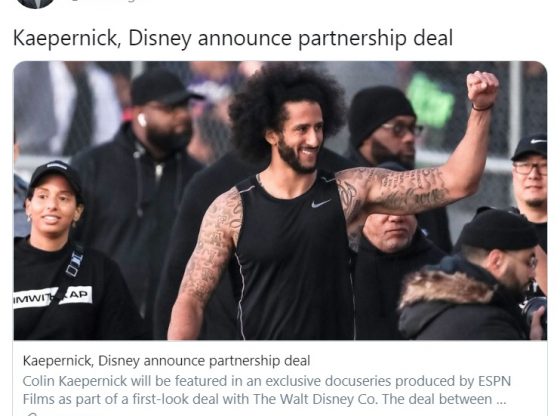 NEW YORK — Colin Kaepernick is cranky. And nothing bothers him more than being in America on its birthday.

Recall that Kaepernick lifted his tail and stank up Independence Day 2019. He complained to Nike, backers of his seven-figure endorsement deal, about a July 4-oriented shoe that featured the 13-star Betsy Ross flag. Kaepernick denounced the item as offensive, due to what he called its ties to slavery. Nike canceled the special shoe, which triggered a national screaming match nearly as loud as that weekend’s fireworks.

Not to be outdone, the national knee-taker spewed a noxious blast of bile last Saturday, just as Americans marked the Fourth of July — this country’s 244th birthday.

“Black ppl have been dehumanized, brutalized, criminalized + terrorized by America for centuries, & are expected to join your commemoration of ‘independence’, while you enslaved our ancestors,” Kaepernick wrote. “We reject your celebration of white supremacy & look forward to liberation for all.”

Black ppl have been dehumanized, brutalized, criminalized + terrorized by America for centuries, & are expected to join your commemoration of “independence”, while you enslaved our ancestors. We reject your celebration of white supremacy & look forward to liberation for all. ✊? pic.twitter.com/YCD2SYlgv4

Absent, however, was any mention of America’s brighter moments: the Union Army’s victory over the Confederacy and the Emancipation of slaves from their Democrat owners, the Civil Rights movement that torpedoed Democrat segregation of those slaves’ progeny, and the innumerable contributions that free blacks have made to American exceptionalism (the diminuendos of Duke Ellington, the literature of Langston Hughes, the songs of the Supremes, the punchlines of Richard Pryor, and the baseballs belted by Barry Bonds, to name merely as many examples as a hand has fingers.)

Despite being surrounded by multi-millionaire black athletes, agents, and sportscasters, Kaepernick sees blacks solely as chased, beaten, and killed by whites. In his world, blacks have been stooped and as miserable as he is since 1619. Kaepernick gives blacks zero credit for doing anything for themselves or anyone else in 401 years.

Two consecutive Fourths of July have found this washed-up footballer ripping this country to shreds on one of the few holidays (Thanksgiving is another) when the nation comes together for an observance equally accessible to blacks and whites, men and women, young and old, Christians and Jews, gays and straights, the holy and the heathen. In other words: Americans. Anyone who loves this country can honor it on the anniversary of its birth on July 4, 1776. Rather than participate in — or at least tolerate — this one day of shared patriotic devotion, Kaepernick instead scorned Saturday’s badly needed glimmer of unity. But, then again, sowing bitterness and strife is this human crab’s only evident talent.

Kaepernick today has traveled light-years from where he stood on July 4, 2011, when he ungrammatically declared via Twitter:

Nine years later, Kaepernick is not just a liberal Democrat. He has devolved into a hard-Left, US-hating, anti-American radical. Any NFL team that hires Kaepernick will signal the American public very loudly that it shares this malcontent’s contempt for the country in which it operates and from which it draws its fans, viewers, and sponsors.

The excellent news for Kaepernick is that, unlike a citizen of Cuba or North Korea, he is free to leave. He might be happier in Ghana, which he visited on July 4, 2017. “In a quest to find my personal independence, I had to find out where my ancestors came from,” Kaepernick explained on Instagram. “I set out tracing my African ancestral roots, and it lead me to Ghana.”

As luck would have it for the relentlessly oppressed Kaepernick, that west-African country’s Minister of the Interior is empowered to “grant the ‘right of abode’ to any person of African ancestry,” the African Union reported in 2015. Much as Israel heartily welcomes Jews from around the world who move there, Ghana has opened its doors to members of Africa’s historical diaspora. Kaepernick should take full advantage of this policy. He can harness his energy and earnings and, as its newest denizen, make Ghana great again.

If he does this, Kaepernick finally should find satisfaction, and the other 330 million Americans can get on with our lives, free at last of one of the most divisive, toxic ingrates ever to disgrace this republic.

If Kaepernick needs any help with one-way, first-class airfare to Kotoka International Airport, including ground transfers and luggage fees, he and/or his staff should contact me immediately. I hereby publicly pledge to drop whatever I am doing and personally raise the money it takes to make this dream come true for Kaepernick, at no transportation cost to him. I further promise to find the money for his first week’s hotel stay in Accra, Ghana’s capital. That extra time and free lodging should help him find and purchase a permanent home. All Kaepernick must do is promise never to return to this nation, which he loathes so much.

Colin Kaepernick should accept my sincere proposal. It sure beats anything the NFL has offered him lately.

Deroy Murdock is a Manhattan-based Fox News Contributor, a contributing editor with National Review Online, and a senior fellow with the London Center for Policy Research. An abridged version of this opinion piece first appeared at Newsmax.com.