Home /Murdock Archives, News, Opinion/Free Advice to the GOP on COVID-19 Stimulus Bill No. 4 (or 5?) 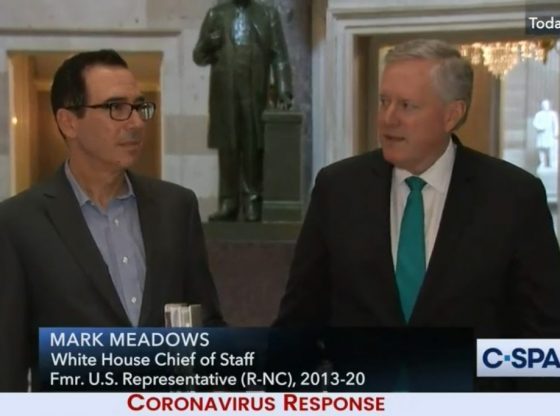 NEW YORK — Will Team Trump stand tough in the ongoing wrangling over the next COVID-19 stimulus bill? At this writing, it’s an open question whether the GOP will credit themselves or crash and burn on this, the fourth such piece of legislation. Or perhaps the fifth, depending on how you count them.

President Donald J. Trump and the Republicans seem to be at an impasse in negotiations with House Speaker Nancy Pelosi (D – California) and Senate Democrat Leader Chuck Schumer of New York. If so, President Trump may issue an executive order to suspend collection of the payroll tax. This would give workers an immediate 7.5 percent pay boost. It might encourage employers to hire new staffers, especially if job creators are excused from paying their 7.5 percent portion of this tax.

What about the $600 per week in extra federal unemployment funds paid atop the standard jobless relief that was offered before the Chinese Communist germs arrived in January and wrecked America’s beautiful economy?

A Chyron on Fox News Channel on Wednesday suggested a GOP cave-in on this Democrat demand:

The trouble with such a move is that these funds often exceed what workers earned on their jobs pre-COVID. A dentist, a restaurateur, and several other business people have told me that their employees do not want to return to work, given that Uncle Sam pays them handsomely to relax and watch Netflix.

Pelosi and Schumer know this. They want these jobless employees to stay home and remain in what Karl Marx called the Standing Army of the Unemployed. Higher jobless rates make it easier for Democrats to hammer Trump and the GOP and, possibly, drag a babbling, incoherent Uncle Joe across the finish line on November 3.

However, if that subsidy gets dumped or chopped, these furloughed workers will recalculate their finances and return to their previous posts. This will lower the unemployment rate, allow boarded-up businesses to re-open, and stimulate the economy. This is the right thing for America and the right thing for the president’s and the GOP’s electoral prospects.

Republican negotiators should hold out as long as possible. And if the president issues that executive order, all the better.

He could craft this so that the payroll tax cut kicks in at once, prospectively, from the day it’s signed.

Alternatively, Trump could inject rocket fuel into the economy by making the payroll tax cut retroactive to April 1. Trump declared COVID-19 a national emergency on March 13. Most people were laid off after April 1, which landed two weeks later. It also marked the start of 2Q, which makes these calculations easier.

If this is all impossible, Republicans should agree to $300 per week in federal bonus unemployment benefits, including three months of continued payments for those who return to work. This will nudge people back into the economy. This will push the unemployment rate down, amid headlines in September, October, and November about millions of jobs being created. With any luck, this will whittle the unemployment rate back into single digits. It won’t be 3.5 percent, as it was pre-Kung Flu, but jobless numbers in the 8 or 9 percent range (or even lower) will show the American people that the nation is heading steadily in the right direction — toward prosperity.

I am not crazy about paying people not to work and paying them to work. However, this whole thing might wind up in a compromise, which usually makes no one entirely happy. So, if Republicans must accept more spending than desired, the GOP might as well entice people to go back to work and cut the nettlesome unemployment rate below the 10.2 percent figure announced this morning. This should happen — for humane, economic, and political reasons.

Also, if mayors and governors keep schools closed, the federal government should give parents vouchers, so they can send their kids to schools that are open. And Senate Majority Leader Mitch McConnell (R- Kentucky) should schedule a vote on this exact measure. If it passes, hooray. If it fails, the GOP should take names and then meet the offending Democrats in the closest dark alley.

If schools are closed, many parents who return to work will need daycare. Congress should offer tax relief for such expenses.

Yes, the U.S. Tax Code is more clogged than a kitchen sink after the non-chefs finish washing the Thanksgiving dishes. However, this is an emergency, and Republicans need to get something out of the deal that likely will emerge, godawful as it might be.

Again, McConnell should hold a vote on such a bill. If it prevails, hallelujah. Send it to Pelosi and challenge her to pass it. If the measure fails, jot down the names of Democrats who voted Nay, make them world-famous, and then snip their brake lines in November.

For current and future reference, McConnell should pass a Senate bill with as many shiny GOP goodies as possible. Every one of these items, and others, should be brought up for votes, as amendments. Some will pass. Some will fail. But Democrat senators should have to decide Yea or Nay on each and every amendment. And voters can applaud or excoriate them and their party accordingly, come November.

Such a McConnell bill should go to a conference committee for reconciliation with the bill that Pelosi passed last month. The latter was a $3 trillion far-Left monster. However, to her credit, it contained every Democrat’s wish list for Santa Claus, Hanukkah Harry, and Charles Darwin, combined. That was Pelosi’s opening gambit.

Conversely, Republicans typically negotiate with themselves. As soon as they convince each other that Democrats never will agree to A, B, and C, they approach Schumer and Pelosi and beg for D, E, and F. Chuck and Nancy knock D and E off the table. Republicans grab F, declare victory, and then amaze themselves with their brilliance.

They don’t call the GOP the Stupid Party for nothing.

On Educational Choice, Biden Itches to Stand in the Schoolhouse Door
The Left Disguises Fellow Leftist Kamala Harris as a Moderate