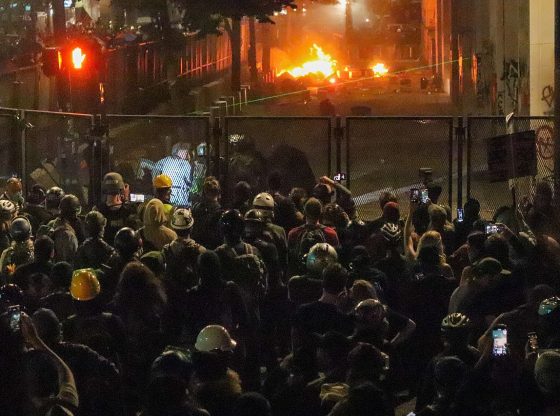 NEW YORK — Why does the Left continue to riot and loot nine weeks after George Floyd’s funeral? On Monday, August 17, vandals and marauders smashed their way through luxury retail establishments on Chicago’s Magnificent Mile, far from the ‘hood. They even attacked the nearby Ronald McDonald House, as seriously ill children and their petrified parents cowered within.

“I don’t care if someone decides to loot a Gucci or a Macy’s or a Nike, because that makes sure that that person eats,” Atkins said. Presumably, people steal Gucci bags, steam them, and gobble them down. “Not only that,” Atkins added. “That is reparations. Anything they want to take, take it.” BLM calls this pandemonium “taking reparations from corporations.”

What the hell is going on here?

Many factors are at play, not least the words of Vladimir Ilych Ulyanov, better known as Lenin. The Russian revolutionary repeated this slogan as he plotted the overthrow of Czar Nicholas II: “The worse, the better.” In other words, the more chaos the Bolsheviks could ignite, the more likely that an exhausted and exasperated public would pin their pain on the House of Romanov, scream for their ouster, and — at least grudgingly —  welcome Lenin and the Reds.

The worse, the better.

Contributing to this explosive formula, top Democrats withhold the adult supervision that normally would lead them to tell the anarchists and domestic terrorists to grow up, drain their Molotov cocktails, and keep their beefs peaceful. Instead, the most prominent Democrats either encourage this pandemonium, clam up, or pretend that it’s not happening. Their failure to condemn this havoc fuels more of it.

Biden and Harris’ silence on America’s worst social unrest since 1968 is their official statement on this matter.

“George Wallace may be gone,” Obama said at the July 30 funeral of Congressman John Lewis (D – Georgia), the fearless 1960s civil rights pioneer. “But we can witness our federal government sending agents to use tear gas and batons against peaceful demonstrators.” So, a former president of the United States super-spreads the lie that those engaged in wanton devastation are just placid social activists. Obama also said, “Bull Connor may be gone. But today we witness with our own eyes police officers kneeling on the necks of black Americans.”

“Trump and his stormtroopers must be stopped,” House Speaker Nancy Pelosi demanded on July 17, via Twitter. Repugnantly equating federal DHS officers to Adolf Hitler’s Jew-killing trans-European invaders, Pelosi accused them of “Kidnapping protesters and causing severe injuries in response to graffiti.” Once again, according to America’s most powerful Democrat, who is second in line to the presidency, the perpetrators of mass destruction are mere “protesters.”

Pelosi also could have poured cold water on the statuecide that was rampant just weeks ago. Rather than lead, she yawned.

“I don’t care that much about statues,” Pelosi told journalists at a press conference last month. Regarding the removal of controversial public monuments, one newsman asked: “Shouldn’t that be done by a commission or a city council, not a mob in the middle of the night?”

Pelosi shrugged: “People will do what they do.”

This is the adult-supervision equivalent of Mom donning earplugs and a sleep-mask as her teenagers and their pals level the house.

Was Clyburn casually lying through his clenched teeth, as Congressman Adam Schiff (D – California) does as effortlessly as most people exhale? Or was Clyburn holistically out to brunch?

Clyburn’s tone and manner suggested that he truly lacks what America’s GIs call “situational awareness.” Or, in civilian terms, he has no bloody clue what’s happening around him. Rather than humiliate himself on morning TV, Clyburn should have disabled his alarm clock and snored in until Noon.

In case Clyburn has dozed like Rip Van Winkle since May 28, here is how

Every night for the past two months, a mob of hundreds of rioters has laid siege to the federal courthouse and other nearby federal property. The rioters arrive equipped for a fight, armed with powerful slingshots, Tasers, sledgehammers, saws, knives, rifles, and explosive devices.

What unfolds nightly around the courthouse cannot reasonably be called a protest; it is, by any objective measure, an assault on the Government of the United States. In recent nights, rioters have barricaded the front door of the courthouse, pried plywood off the windows with crowbars, and thrown commercial-grade fireworks into the building in an apparent attempt to burn it down with federal personnel inside.

Multnomah County District Attorney Mike Schmidt announced Tuesday that he would prosecute just 45 of the 550 protesters whom Portland police officers have arrested since May 29. Schmidt dropped charges against 92 percent of these suspects.

Even though most arrestees are white, Schmidt said, “This policy acknowledges that centuries of disparate treatment of black and brown people have left people with deep wounds.” He added: “This policy recognizes in order to advance public safety, we must not only prevent crime but we must also promote economic and housing stability, educational opportunities, strong family and community relationships, mental and physical health, and build trust with everybody in our community.”

Back to Sleepy James Clyburn. After disgustingly likening America’s brave DHS personnel to Hitler’s Gestapo, Clyburn either suffered wholesale memory loss or tried to vanish into his own cloud of rhetorical squid ink: “I don’t know if I ever compared what they did to the Gestapo.” After Hegseth pointed out, “It’s right there in the transcript!” Clyburn demurred: “I said I don’t think so. Maybe I did. I’m never one to think I never can misspeak.”

And then Clyburn doubled down.

“What I’ve seen in Portland reminds me very much of what I saw in Anniston, Alabama, back in the ‘60s, what I saw on the Edmund Pettus Bridge, back in the ‘60s: state-sponsored and supported terrorism which was visited upon people who were protesting peacefully.”

So, America’s DHS agents are not actual Nazis. They’re just 2020’s version of the white Democrats who enforced Jim Crow segregation nearly 60 years ago and pummeled peaceful, passive, unarmed, undisguised civil-rights activists in broad daylight. The intrepid MLK, John Lewis, and their devotedly non-violent followers, of course, were nothing like the Leftists in Portland who have spent the last 11 weeks hurling bottles of peace, bricks of love, and bombs of understanding.

What a great way to unite the country! Thank God Clyburn is using words that lower the temperature and bring Americans together.

Sarcasm aside, Clyburn is doing what comes naturally for Democrats, especially in election years: jangling Jim Crow’s ghostly chains to frighten black people and stampede them into the polls to vote Democrat. And, as usual, after November 3, Clyburn and other Democrats will abandon and betray these same blacks…until the next election.

On November 3, voters of all creeds and colors should flush Biden, Harris, Obama, Pelosi, Clyburn, and the entire Democrat Party straight into the nearest water-treatment plant.