Home /Murdock Archives, News, Opinion/What Happened At The Capitol Is Un-American and a Disservice to Trump 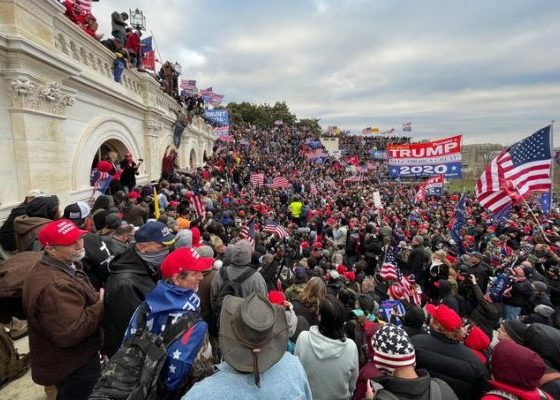 Yesterday a group of protesters took to storming the capitol, they destroyed property, intimidated elected officials, and stole from the halls of Congress. All of this will have achieved nothing and hurt Trump and the GOP in the long run. More from Deroy Murdock in Fox News:

It’s hard to express my shock and sadness at seeing America’s legislative palace breached, a door to the U.S. House broken, and senators and House members hunkering down, apparently in gas masks. Most astonishing is to see those involved in this violence not waving Antifa flags but, instead, Trump and MAGA banners.

It’s only Jan. 6, but the 2021 Nobel Prizes for Unforced Errors and a Suicidal Leap from the Moral High Ground go to the pro-Trump protesters marauding through the halls of The People’s House.

It would be bad enough if the acts of terrorism now being perpetrated by this mob were underway while House Speaker Nancy Pelosi, D-Calif., banged her gavel and shut down any objections to Electoral College votes that many of my fellow Trump fans believe are tainted by ballot irregularities.

On the contrary, 180 degrees, the House and Senate were debating Republican objections to Arizona’s Electoral College votes. Sen. Ted Cruz R-Texas, was making his case to his colleagues, with his usual eloquence.

Many are shocked by what went on yesterday and many believed that an event like this was just not possible after the security measures brought forward after September 11th were put into place. In the coming days, more information will come out related to these events, stay tuned.

??? And just HOW does a False Flag PsyOp where the MAJORITY that ‘stormed’ the Capital were antifa/blm ‘hurt Trump’?? HE didn’t order antifa/blm VIOLENCE!! WE ALL SEE the Capital ‘cops’ MOVING the barriers, outside, to let the crowd IN. WE ALL SEE how, once the crowd was INSIDE, they WERE LED by Capital ‘cops’ through the halls!! WE ALL SEE who were the ones CAUSING the VIOLENCE….antifa/blm, because they are now STARTING TO BE IDENTIFIED!! HOW is something that the DEEP STATE did, ‘Trump’s fault’?? Sorry…..TRY AGAIN!

ANTIFA is behind the Rioting at the Capital Building, and Anyone Who Doubts that has been Living Under a Rock for the past year! Never has a Pro Trump Rally or Event Turn Violent & Destructive, however at Every single ANTIFA/BLM Protest Rioting Broke Out!

Deroy my friend get up to speed. This was a planned and organized action with bus loads of Antifa thugs arriving shortly before the incident masquerading as Trump supporters. They were lined up and allowed into the building in single file and guided to the chambers. Unfortunately for you and all others there are videos to back all this up and Antifa members ID’d by facial recognition.

Don’t condone what has transpired yesterday in D.C., the President’s lackluster-intolerance addressing it, nor condone the past violence at the hands of ANTIFA, BLM, and others who pillaged property, put citizens in harm’s way, destroyed businesses, etc. while some of our politicians offered so few retorts of condemnation through imposing legal and physical protective restraints wherever and whenever needed.
Let’s also not forget that through many of these civil disturbances some on the Left called on their constituents to confront Republicans and Trump supporters with hostility wherever found by offering them little solace and peace even in their homes if it need be. Believe it or not these are some of the same officials who had remained secure in the comfort of their government offices, often under the protection of the police, yes, the men and women in blue that the Left claimed had to be defunded.
Now, that our DC Legislators have experienced a degree of pain and inconvenience from such violence themselves let’s see how they are going to react, speak out, and legislate to address this civil disconnect and divisiveness. Haven’t they themselves enabled much of this by their seeming indifference just as we all struggle through a Wuhan-Coronavirus pandemic? So much of this is also hinged to so many ensuing economic hardships throughout this country as the overseas Asian dragon enslaves Muslims and others while setting embers of discontent into flames of divisiveness and hate wherever Democracy thrives.

The Big Steal and sell out is over. Time to move on. Adios!

wpDiscuz
6
0
Would love your thoughts, please comment.x
()
x
| Reply
You are going to send email to