Biden Caused the Man-Made Disaster on the Border 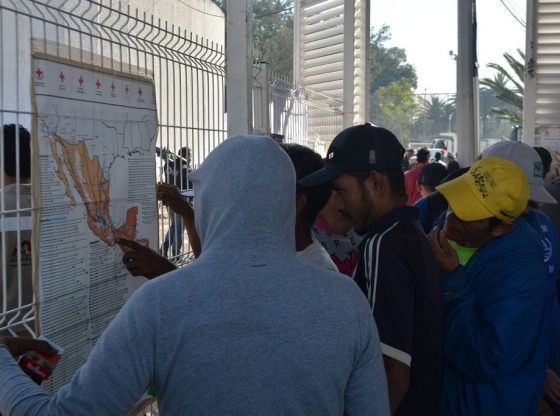 EDITOR’S NOTE: This article has been updated to include a quote from Mexican President Andres Manuel Lopez Obrador.

MIAMI — Whether one calls it a crisis or a challenge, the U.S.-Mexico border has become a man-made disaster hand-crafted by President Joe Biden. Candidate Biden promised illegal aliens red-carpet treatment, amnesty, and citizenship.

The Customs and Border Protection’s encounters with single adults on the southern frontier climbed 157 percent in January 2021 versus January 2020. CBP confronted 100,441 illegals last month, up 97 percent from February 2020, and the highest level of such run-ins in 15 Februaries, according to Reuters. This included 9,000 unaccompanied children; 3,000 kids were under 12.

On Tuesday, 3,250 children were in Biden’s custody, 1,360 of them beyond the 72-hour legal limit. As illegal-alien detention space dwindles, the administration might move these youths to a San Jose NASA facility.

“They [illegal aliens] see him as the migrant president, and so many feel they’re going to reach the United States,” Mexican President Andres Manuel Lopez Obrador said about Biden on March 2. “We need to work together to regulate the flow, because this business can’t be tackled from one day to the next.”

White House Chief of Staff Ron Klain calls this fine mess “one of the most vexing problems we face.”

None of this should surprise anyone. The Democrats’ no-borders calamity was entirely predictable and is easy to explain. Two huge jet engines power this metaphorical airplane.

The first is Democrats’ Trump Derangement Syndrome: “DonaldTrump” favored it, so it must be demolished. This goes beyond Trump’s “evil, fascist border wall,” whose construction Biden halted on Day One — contradicting his 2006 Senate vote for the Secure Fence Act. Biden also killed Trump’s Remain in Mexico policy and diplomatic pacts with El Salvador, Guatemala, and Honduras. These initiatives stopped the illegal-alien caravans that previously invaded America with abandon. Trump ended these crises and resecured the border. But Trump’s approach bears his fingerprints. So, Biden reckoned, it must be obliterated.

The second engine: Biden and his brethren consider these illegals Future Democrats of America. If they bust through the border, it might take eight years, perhaps 10, maybe 20. But, sooner or later, some Democrat government of tomorrow almost surely will grant them forgiveness, a “path to citizenship,” and voter registration. Most of them likely will back Democrats. And that is the key motive for this madness. As their future majority kicks down the Golden Door, Democrats helpfully remove the hinges.

Jennifer Palmieri, Hillary Clinton’s former communications director, revealed this family secret in a 2018 Center for American Progress memo. She called DACA recipients — whose parents illegally accompanied them into the US — “a critical component of the Democratic Party’s future electoral success.” Palmieri added that if Democrats did not act accordingly, “the risk is that Latinos fail to see them as a true ally, and as a result sit out crucial elections.”

Meanwhile, coyotes and other traffickers deploy children as human shields to help breach the border and fleece their parents for the privilege.

Last week, an SUV crammed with 25 illegals crashed in California, killing 13. Most reportedly paid $10,000 each for this deadly ride. Several Guatemalans dropped $25,000 apiece for this lethal trip.

Trump’s much-reviled “Kids in cages” are back! The same media who breathed fire at the former president for “warehousing” illegal-alien children in “cages” built by Obama-Biden are now remarkably relaxed as Biden’s “Kids in containers” languish in shelters made from steel intermodal-transit boxes.

Also, in Brownsville, Texas, 185 of 1,553 illegals tested were C-19 positive. That’s an 11.9 percent infection rate! These folks were not deported. They were given bus tickets and whisked into the US interior; the health of the American people be damned. Biden pledged to wipe out COVID-19. Instead, he literally imports people stricken by the China virus.

Beyond abused children, Biden’s other victims are the millions of immigrants who arrived legally. Their path to citizenship involves delays, paperwork, ever-changing rules, legal bills, and other headaches — while being trapped on sluggish propeller planes. Meanwhile, illegal aliens whiz by overhead in jumbo jets fueled by Democrats’ Trump-hatred and infinite craving for political control.

Legal immigrants — who came to America with permission — have every reason to experience Joe Biden’s self-imposed cabin depressurization and lunge for their air-sickness bags. So does every U.S. citizen who watches this new president “unify” this country by plunging it into a tailspin.

Biden’s $1.9 Trillion ‘Rescue Plan’ Deserves a Torpedo in its Hull
No, Democrats, You did not Invent the China-Virus Vaccines

I saw in the newspaper that two different bunches were being flown to two different Texas locations. They need to be flown to Delaware and let them deal with them awhile.

Or to the WH so Biden can care for them with the illegal money he stole.

Wishful thinking, but you and I both know that the biden administration will use taxpayer money to feed, clothe, and house all these illegals. biden will probably get them drivers licenses and subsidize vehicle payments to get them driving in America.

Wilmington DE, next door to the Bidens!

Yea right, how likely is that? Come on, really?

Send them to DC and put them INSIDE the barricades that Pelosi wants to keep up indefinitely. Things will change quickly, I’m sure.

Send them all back and throw Biden in jail–or let him go to these states with these illegals and be with thmt get the virus that we have all fought to get rid of but he brings them here bringing it with. How stupid is this man?

Marcia: Now you’ve done it!!! You insulted Stupid people. They have got more brains that the illegal occupying the Black House. If biteme had a brain, it would be like a pea in a boxcar and just roll around, lots of empty space.

Silent Majority are a bunch of losers, and Trump losing proves the point. Silent majority is dead and gone.

Patriotic Americans can only hope that there are millions of democrat voters that are being adversely affected by bidens agenda. Let them have buyers remorse and suffer.

This is no accident just like the virus. beijing biden/harris are like a couple of Jeff Dunham’s puppets — they just say and do what they are being ordered to say and do. Just like the intentional release of the virus, this returning crisis at the border is just 2 more steps in their agenda(deep state/nwo globalists) to turn this country into Venezuela. biden is nothing but a compromised idiot willing to do whatever,no matter how low or corrupt, to feel he is in power or for the almighty dollar. It won’t take long to understand what a disaster this will be for ALL of America and that includes the dirtbags who put these 2 in the WH and the absolute ignorant American voters who helped. We will know who voted for these pathetic pair because they will be the first ones whining and crying.

It is so sad that our country is lead by a dementia pervert and a communist prostitute! America deserves better. These two pathetic people don’t have the ability to govern. The crises at our southern is horrible! These bottom feeders breaking into our country with Covid and other diseases that have been eradicated years ago. No checking or anything, just move them into
the country. In the area where I live is 90 % Hispanic and of that 50 % are illegal. Every day more
Covid numbers appear as the people go back home or someone comes to visit from Mexico and more Covid. Public school kids aren’t in school – they are on zoom, can’t go see a doctor – it’s zoom.
Can’t inside a restaurant, and some business still aren’t open. Biden you still want the masks worn,
Biden what the hell are you doing about the problem you created? You and Kamala need to step down. You stole the election snd aren’ t capable of running a country – dumb snd dumber!

Sad to say, but I believe Biden has NO IDEA on what is really happening. He is a puppet and they are pushing all the nonsense thru while they can. Then when Harris is in they will blame it all on Biden.. Their way of being cowards………

They need to be dropped in the middle of the Pacific.

I agree with the outrage. But Biden doesn’t cause anything and didn’t cause the border crisis. He’s an afflicted moron who can barely read the teleprompter. Leftist radicals funded by billionaires who hate conservatism are orchestrating this monstrous problem and all the other problems now facing the most successful free enterprise nation in the world. We’re going down folks and the weakest slobs on the planet are the sinkers.

This is not an immigration problem, this is a planned and coordinated invasion of our country, encouraged and supported by the democrats. We need to call it what is is – an INVASION. You do not have 100,000 a MONTH coming into the country illegally! Those in government behind this should be charged with treason! We need to stop using PC terms to make it sound better. Call them out for what they are and what this really is!

TIME TO DITCH BIDEN AND HARRIS!

Send them ALL to Biden’s house & to NP’s SF house.& make sure they have not been tested for COVED yet.

Joe and Nasty are truly looking to destroy our country. They can only think of themselves and their net worth at the expense of the people who put them in office. There is nothing worse than shysters defrauding the people right to their faces.