No, Democrats, You did not Invent the China-Virus Vaccines

Home /Murdock Archives, News, Opinion/No, Democrats, You did not Invent the China-Virus Vaccines 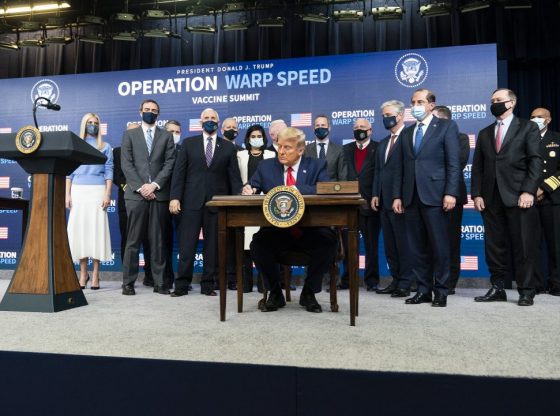 MIAMI — President Joe Biden will address the nation tonight on the one-year anniversary of the World Health Organization’s declaration of the China-virus global pandemic. Biden will have a new opportunity to acknowledge President Donald J. Trump’s contribution to fighting this plague through the Pfizer and Moderna vaccines that his Operation Warp Speed program yielded in record time. Johnson & Johnson’s inoculation also was launched on Trump’s watch. However, it arrived during Biden’s tenure.

Biden might ignore these facts and pretend that Trump merely played golf as COVID-19 wreaked havoc at home and abroad. If so, this would echo the Democrat lie that Trump ignored the pandemic and had nothing to do with developing these life-saving prophylactics.

For months, Democrats have spoken as if there were no COVID-19 vaccines until the lazy and unfocused “DonaldTrump” left office, and Jumpin’ Joe Biden took charge and personally coaxed these injections from his own laboratory in the White House residence.

Biden told CNN’s Anderson Cooper on February 16: “…it’s one thing to have the vaccine — which we didn’t have when we came into office.”

“…we’re starting from scratch on something that’s been raging for almost an entire year!” Vice President Kamala Harris told Axios a day earlier.

White House Press Secretary Jen Psaki said: “We’re building out of the hole that we inherited.”

According to Governor Phil Murphy (D – New Jersey), “The Biden team is doing a great job. They inherited an empty cupboard.”

Official data from the Centers for Disease Control and Prevention are a lethal injection in the arm of this nonsense.

The first COVID-19 vaccines were administered last December 14 — 37 days before Biden’s inauguration. That day, 3,550 people got the Pfizer shot.

Biden pledged to deliver 1 million vaccines per day. What a laudable objective! Indeed, this was such a great idea that it became reality on January 7 — 13 days before the Biden Era. That day, 1,085,618 vaccines were administered. The next day, 1,148,270 men and women got vaccinated.

While these figures fluctuated and sometimes fell short of Biden’s benchmark, at least a million individuals were vaccinated on five different days in the final weeks of Trump’s term. This included four consecutive days: January 12 through 15.

Despite his mutterings to the contrary, Biden personally received not one, but two shots during Trump’s tenure. The first was administered on live TV on December 21. The second on January 11. These videos are readily available, if someone would like to refresh the president’s recollection.

Admiral Brett Giroir MD, former Assistant Secretary of Health, was deeply involved in Trump’s inoculation effort, Giroir wrote February 25 via Twitter: “I am so tired of the continuing lies that @potus [Biden] inherited a #COVID19Vaccine mess, when in fact 99% of current vaccine manufacturing and distribution is EXACTLY as planned and explicitly described by Trump Administration’s Operation Warp Speed.”

“I pushed the FDA like they have never been pushed before,” President Trump told the Conservative Political Action Conference in Orlando, Florida, on February 28. “They told me that loud and clear. They have never been pushed like I pushed them. I didn’t like them at all, but once we got it done, I said, ‘I now love you very much.’ What the Trump administration has done with vaccines has in many respects, perhaps saved large portions of the world. Not only our country, but large portions of the world.”

“Not only did we push the FDA far beyond what the bureaucrats wanted to do,” Trump added. “We also put up billions and billions of dollars, 10 billion, to produce the vaccines before we knew they were going to work. It was called a calculated bet or a calculated risk. We took a risk because if we didn’t do that, you still wouldn’t have the vaccines.”

The Biden Administration, to its credit, got vaccinationsa up to its daily peak to date: 2,801,422 on February 26. Good for them.

But Team Biden should be honest, humble, and grateful enough to admit that they would have zero vaccines to ship today, were it not for Donald J. Trump,  his government colleagues, and their private-sector partners in Operation Warp Speed. They jointly created two vaccines in a record-breaking nine months and brought them to market by New Year’s Eve 2020, just as President Trump promised — despite the derisive laughter of his useless critics.

No use, they are ALL in ONE and the SAME bed or they feel power-LESS….I don’t trust ANY of them in DC anymore….We need to pay them a VISIT in DC, ASAP….

It absolutely amazing that these ignorant lefties assume everyone is as stupid as they are. I really believe the country is sick and tired of there continued lying. We see film if their lies and they tell us that’s not what we saw.
REALLY??? Your BS us getting sickening. Soon we will be done with all of you and your vile lies and distortion. Who needs a government NOBODY believes?

Pathetic lies will come back to bite these fools? 2022 will be a reckoning of sort. Biden is a person of interest in so many investigations but the cover up is in the works. BTW, where is Hunter?

Hunter is snorting coke on a Pleasure Boat !

And paid for with OUR tax dollars!

Dems. are liars, nothing but liars.

Of course NOT, especially with that “brain” pretty much gone by now anyway, but he is also NOT president, he was NOT elected…..

What Biden is !! Aman with ties to China, Iran and others , He is a servant to Obama , He is a traitor in the White house and should be removed

Obama is running this thing. Biden does not know what day it is

Don’t wait today MUST sue Nancy Pelosi for gross negligence causing the wrongful dead of Ashli Babbit in the Capitol riot, she was unarmed, who gave those orders to the the Capitol police to shot an unarmed person without first giving prior notice of that they will be shooting at them , violating the law.
No one is above the Law not even the POTUS, Nancy fired the experienced Capitol chief of police days before the riots and placed an inexperienced person to be in charge, refused the offer from the POTUS TRUMP to have 10,000 troops to stop riots in DC, there are multiple videos that show how the Capitol Police let the rioters in the Capitol and also guide them to the chambers then inside to ambush them and gun down an innocent person.
We The People want the Law to be upheld even to everyone, no one is above the LAW.
Now the say the Capitol police that shot Babbit is in hiding who is helping him to do so, and why they haven’t open an investigation!!!.

The Delaware Dunce isn’t responsible for any accomplishments or even any of this political claptrap. He’s an afflicted incompetent barely able to read his teleprompter. Radical socialists behind a stolen election pull the strings of this puppet-president. Just once, I’d like to see big media reveal the names of individuals or even organizations that direct his activities and words.

This Evil Administration will Never give President Trump credits due, but History will!!! And We The People “Thank You “ DJT!!

I wonder–the victors write the history books. Now that they own the voting protocols it’s Commie time. They are going to keep this Covid scare alive because it equates to control. Meanwhile, they’ll finish killing the 1st and 2nd amendments. 1st Amendment freedom of speech–going away fast! 2nd Amendment–look out!

Nope they didn’t invent it they were just funding china to mess with the crap another crime they have commuted against the world . they should bend all politicians over and let everyone in the world have 3 swats right on their asses . now that would make a wonderful world . I just don’t understand where these prick DAMOCRAPS get off saying we are all racist. If I could understand every language I would talk to all of RHEM and hell even have a cookout but I damn sure would not invite a DAMOCRAP POLITICIAN. People I like idiots like we have that are ruining our country they are not smart enough to be considered human much less people . these DAMOCRAPS ARE COMPLETELY IGNORANT AND THERE IS NOT ONE USE FOR ANYONE OF THEM.

wpDiscuz
17
0
Would love your thoughts, please comment.x
()
x
| Reply
You are going to send email to