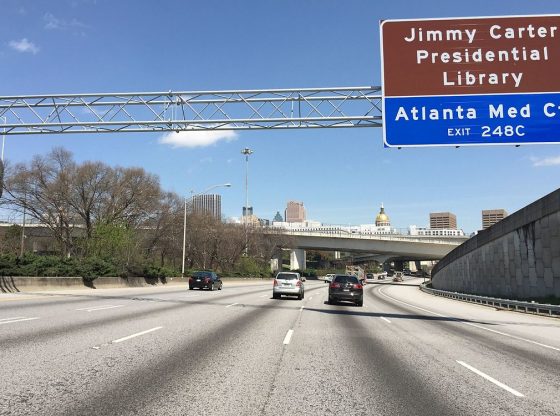 View north along The Downtown Connector (Interstate 75 and Interstate 85) near Exit 247 (Interstate 20) in Atlanta, Georgia
BY: Deroy Murdock | Murdock Archives,News,Opinion |

NEW YORK — Comedian Dennis Miller indirectly made the case for new infrastructure spending in a legendary rant on his old HBO program: “The traffic on the San Diego Freeway is so slow,” Miller observed years ago, “it makes Strom Thurmond’s urine stream look like Splash Mountain.”

Democrats and Republicans from California to Connecticut agree that the federal government can and should spend real money to fix America’s crumbling roads, bridges, airports, and other public conveyances. If the $1.2 Trillion Infrastructure Investment and Jobs Act now racing through the U.S. Senate just did that, it would deserve widespread support and passage this morning.

Alas, as happens virtually every time Washington gets involved, this bill does way too much at too high a cost to individual liberty, limited government, and fiscal prudence.

This bill’s 2,700-page length is the first indication that it’s a spendthrift busybody’s dream. Any bill that could double as a bullet-proof vest should be voted down for that reason alone.

In terms of substance, top free-market groups have sounded the Klaxons about this legislation’s multifarious shortcomings.

“The fact is the so-called infrastructure bill will be an enormous liability to everyone who votes for passage, not just Republicans,” said David McIntosh, president of the Club for Growth. “A majority of Democrats want deregulation, a plurality want a balanced budget amendment and to end deficit spending, and the numbers are even stronger among Republicans. Meanwhile, in Washington, liberals and moderate Republicans are trying to convince the media that America wants what amounts to a climate bill that adds a new mileage tax, spending we can’t afford, and even more regulations.”

A CFG poll found that 75 percent of Republicans oppose a Vehicle Miles-traveled Tax (VMT), which would track the movements of motorists and then levy them for the distances that they have driven. This would sic the IRS on drivers’ wallets and stick Big Brother onto their steering wheels. This bill contains $125 million for a VMT pilot program, with no promise that a full-blown VMT at least will kill the traditional gas tax.

So, why are 18 Republican senators supporting a bill that plants the seeds for this new tax, which three-quarters of their voters dislike — especially those heavily GOP rural areas, where people drive long distances? Why, indeed, do Republicans believe it is their job to ride to the Democrats’ rescue?

CFG also calculates that just $110 billion of this bill actually pertains to streets, overpasses, tunnels, and what normal people consider infrastructure. That’s about 9.2 percent of this spending bomb.

Where does the other 90.8 percent of this measure cover?

Americans for Tax Reform cited just a few items in this bill that should make many a conservative aim his sedan right into the nearest oak tree.

–This legislation would establish a Federal System Funding Alternative Advisory Board to opine on the merits of the VMT pilot program. The FSFAAB must include “advocacy groups focused on equity.”

Perfect: This bill will bring Critical Race Theory to an intersection near you!

–This measure would launch a federal Women of Trucking Advisory Board. According to ATR, only 6.6 percent of women are truck drivers. If qualified women suffer sex discrimination in hiring and promotions, then they can turn to local, state, and federal civil right agencies for relief. The federal government need not occupy itself in cajoling women to become truck drivers, if the vast majority of them seem uninterested in that profession. What’s next? A Men in Nursing Advisory Board?

–This juggernaut features a working group that would “provide recommendations to improve Amtrak’s onboard food and beverage service.” Amtrak surely has people on payroll who focus on dining by rail. Let them do their jobs. Aside from that, why not put a suggestion box in each Amtrak Café Car and leave it at that?

–This package features $500 million for colder, more porous sidewalks, all the better to let water seep through them into aquifers. This Healthy Streets Program sounds lovely. But why not devote half a billion dollars to shore up the top five U.S. bridges that are on the verge of fatally collapsing into aquifers rivers?

–No limousine has been left behind among these 2,700 pages. This bill’s “limousine research” creates new rules that will make life harder for such car-service companies.

Manhattan Institute senior fellow Brian Riedl’s excellent case against this boondoggle laments its fiscal potholes. It adds between $256 billion and $350 billion to the rapidly climbing national debt. Beyond that, it’s “paid for” through Houdini-like financial sleight of hand.

“For example,” Riedl explains, “lawmakers claimed $50 billion in ‘savings’ from having the Department of Health and Human Services propose an expensive regulation and then ‘canceling’ it through 2025.”

This is as phony as making reservations for the tasting menu at the ritziest restaurant in town, abandoning one’s table for four, and then pouring the $2,000 “savings” into a brand-new bespoke suit.

There is plenty more of this garbage from whence it came. Please call the U.S. Capitol switchboard at 202-224-3121. Ask for the offices of these 18 Republican senators and tell them to vote “Nay” on Joe Biden’s hard Left/soft Right “infrastructure” Highway to Hell.

Deroy Murdock is a Manhattan-based Fox News Contributor, a contributing editor with National Review Online, and a senior fellow with the London Center for Policy Research. He has collaborated for decades with the organizations cited in this opinion piece.

Good that Pennsylvania wasn’t mentioned. Our representatives are worthless.

Sorry, John, ALL of our elected officals are worthless. It is all about their bottom line not ours. The more BS they can put into these bills the better for their agenda, mainly their pockets.

Any bill that the demonazis support only puts money in their pockets and robs the taxpayers.

The worst thing that ever happened to this country is when the Legislative Branch established themselves on the eternal gravy train. For a long time now it’s been not about We (Us) the People; it’s all about THEM. And JOHN, it’s not only Pennsylvania that has worthless representatives.

Does nothing for energy production

This Monstrosity of a Bill and the RINOs Who Voted for should be set on Fire and Burned to Ashes! Any Bill Requiring Over 2,000 Pages is a Bill that should Never See the Light of Day! Democrat Scum sure Love Spending Our Money on Crap We don’t Want!