JRB is as Overwhelmed as LBJ 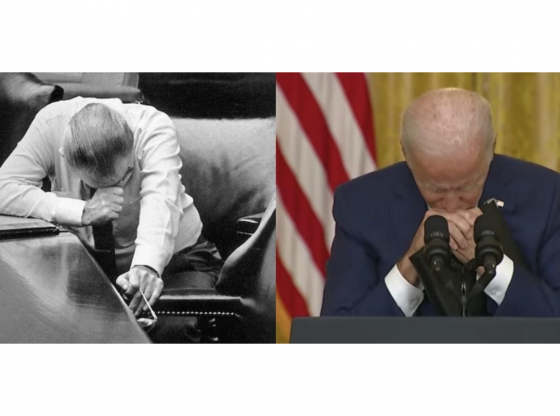 The photo of Joseph Robinette Biden slumped over at the presidential podium last Thursday has become the defining image of his young presidency. Little more than seven months since his inauguration, Biden is encircled by crises and overwhelmed by his own incompetence, disengagement, and disastrous decisions.

From the Afghan meltdown, to the erased southern “border,” to massive spending, to the return of inflation, to coddling criminals, to embracing Critical Race Theory, JRB is drowning in a piranha-filled whirlpool of his own making.

The picture of Biden curling into a veritable fetal position under withering questioning by my intrepid Fox News colleague Peter Doocy parallels another gripping photo.

On July 31, 1968, White House photographer Jack Kightlinger captured an equally exhausted President Lyndon Johnson deep in apparent grief and exasperation as he listened to an audio tape sent from South Vietnam by U.S. Marine Corps Captain Charles Spittal Robb, his son-in-law who was fighting in that conflict. The voice of Chuck Robb, the young man who went on to become Virginia’s Democrat governor and U.S. senator, seemed more than LBJ could handle.

The parallel pictures of two Democrat presidents swamped by events are as poignant as they are ominous.

Demo(n)©rat foreign-policy always end’s-up in the toilet-bowl…if it wasn’t for their “moron” base of clueless lefty supporters they would’ve gone extinct, long ago❗️

I think too much is being made of this “fetal position” claim. I think he was waiting for his communications people to tell him how to answer Doocy’s question.

I do the same thing. Heartburn is a bitch!

Just shows what a pathetic,failure,this embarrassment has been in everything he does,he is just like what obuthead said,leave it to joe to screw things up.This disaster needs to be impeached for total incompetency, and his entire administration needs to be thrown out of office, none are qualified for their jobs, like a re=run of obuthead 2.0 ,we all know what he cost us.

Think he’s bowing his head in contrition for his mistakes? Wrong! He’s listening for instructions from his handlers into his earpiece. There is no sense of guilt or contrition in this nasty mans body.

🤔 You need a brain, a working conscience & a little sense of decency/dignity, to be overwhelmed, when ya keep “routinely” screwing-up, so this is definitely fake-news. There’s obviously a village somewhere, missing an idiot, and, there’s a whole village of DC-swamp critter ‘elite’ idiots who have “rigged an election” to have Joe as their frickking leader. So, ipso facto…it takes a village‼️

I have followed politics since Eisenhower Administration and even tho Carter Adm. was pathetic Bad, this Biden-Harris Administration is The Most Incompetant, Evil, Corrupt, Anti-American Gang of Traitors that Every Single Person Should Be Hung by neck until Dead for TREASON Against America!! God Bless USA & Help We The People Correct this Tremendous MISTAKE, and SOON AS POSSIBLE!!!

When is enough enough! Biden/Harris must be removed for “cause”

When is enough enough! When can we replace Biden/Harris. Can Biden/Harris be removed for “cause”! Can Americans have another Presidential election in 22?

BIDEN AND HARRIS ARE BOTH OVERWHELMED AND CANNOT PERFORM THEIR DUTIES IN A RESPONSIBLE WAY. ONE IS DEMENTED AND THE OTHER IS COMPLETELY UNQUALIFIED.

wpDiscuz
11
0
Would love your thoughts, please comment.x
()
x
| Reply
You are going to send email to