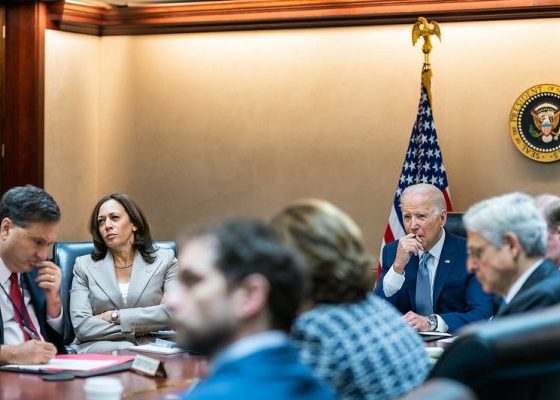 President Joe Biden, 78, has a 7-year-old’s grasp of basic math.

“My Build Back Better Agenda costs zero dollars,” Biden claimed via Twitter on September 25. Regarding this multi-trillion-dollar budget, he continued: “And it adds zero dollars to the national debt.”

One can imagine a second-grader named Joey Biden showing off his new train set and telling his playmates, “My daddy bought it for me at Woolworth’s. So, it didn’t cost anything.”
That’s cute enough to make a coal miner cry. But in a commander-in-chief who turns 79 on November 20, such “thinking” should bring America to tears.

Biden’s Build Back Better Act originally cost $3.5 trillion, or an average $24,424 for each of America’s 143.3 million taxpayers. The House Budget Committee’s version of this socialist extravaganza weighs in at $4.3 trillion. That’s 23 percent more expensive and even further Left. Somehow, Biden argues that all of this costs “zero.”

Perhaps Biden believes that if he and his fellow Democrats can shake down taxpayers for either $3.5 trillion or $4.3 trillion, then this massive dump of jumped-up welfare spending and shiny new entitlements will total “zero.” Never mind the thousands of billions of dollars vacuumed into the U.S. Treasury via the Internal Revenue Service.

But even this absurd “zero” is meaningless. As massive as these tax hikes are, they thankfully are not massive enough to cover this staggeringly high new spending. The Budget Committee’s 2,465-page text proposes a mere $2.3 trillion in tax increases to underwrite this Democrat cornucopia. Of course, this falls short of even the original price tag.

At least 42 times, Americans for Tax Reform reports, Biden publicly pledged these or similar words: “I promise you, you have my word, if you make less than $400,000 a year, you won’t pay a penny more in taxes.”

Since multiplication and division escape most 7-year-olds, Biden might be forgiven for confusing $400,000 for the far lower income levels on which he itches to hike taxes.

The Congressional Joint Committee on Taxation (JCT) announced that Biden’s blueprint would raise taxes on:

Economists understand that the working class will pay much of Biden’s $858 billion corporate-tax-rate increase — from 21 percent to 28 percent of profits. Companies will finance these higher taxes by raising prices (inflation!), firing workers, and slashing or slowing compensation on the survivors.

“Literature suggests that 25 percent of the burden of the corporate tax may be borne by labor in terms of diminished wage growth,” JCT Chief of Staff Thomas A. Barthold told the House Ways & Means Committee on September 14.

Who would get this potential $214.5 billion bill? Barthold said: “Labor. Laborers.”

Biden also has a tot’s grip on what constitutes a “fair share” of income taxes. Like a second-grader, he sees wealthy people and screams insults.

As Biden said on September 16, if his plan is enacted, “the super-wealthy…can finally begin to pay their fair share of what they owe.”

But even a Cub Scout could use the IRS’ statistics to refute Biden’s remarks. The latest data show that in 2018, the top 1 percent of taxpayers earned at least $540,000 each. This group scored 21 percent of all national income and paid 40 percent of all federal income taxes.

And the bottom 50 percent? They earned less than $43,600 each, made 12 percent of national income, and paid a measly 3 percent of income taxes.

As childlike as is Joe Biden’s mathematical prowess, he is a veritable calculus professor beside House Speaker Nancy Pelosi (D – California). Evidently, she never learned to count.

How do we trust Joe Biden he is stupid he la liar and he should go to jail.

U can’t fix stupid, or cure mental illness. But saying 3.5 trillion + i.4 trillion will cost u nothing is idiotic,and pure bullshit, like the ignoramous, and party that is lying about it.Come on man,u know the thing, popcorn says it will be ok. or I’ll rap that chain around your pea brain.

Are you sure his math level was that High. I know I can’t be as smart as Biden, I have no idea how one spends trillions, and has know income other then tax’s, and it cost us nothing, I want to learn that secret. This is all a tax on the middle class, and small business’s. I realize I must have limited knowledge, and little common sense, because I would think, create a friendly business environment towards business, would encourage more business’s to open and hire people, more people working, more tax’s coming to the govt, from the business, as well as the workers, and more spending would create a better environment for all. The more people relying on govt, handouts, can only mean higher tax’s, on all the working class. But what do I know, I have no degree, all these experts, went to special schools, and received their degree in Stupidly, and I don’t have one of them, no degree at all .

What is going to happen is the companies that President Trump was successful bring back to America will leave again. How is this good for America??? IT ISN’T.

Joe Biden’s grasp of economics is less than a two years old. The Dems lack of the burden that this will be put on Americans – both this generation and the next generations – are signs of not caring and arrogance. It is time to stop spending foolishly and pay off the debts we owe. Surely there are some Dems and RINOs who are willing to do what their constituates want them to do.

One would hope, but doesn’t appear this is happening. We need to hope that Manchin and other Dem (can’t remember her name) do not cave.

Democracy is an evil form of government of two wolves and a sheep voting on what to have for dinner. It’s also a majority of whites voting to subject a minority of blacks to endure Jim Crow laws. Instead of de-mob-ocracy, we need to revert to the republic our brilliant founders mandated. Our DC employees fully intend to be our masters, and we need to force them to obey the law–our Constitution. Google conventionofstates.

Our country is a Republic that is governed by Democracy. What the Libs want is Socialism/Communism. They had better watch what they wish for. They just might get it. And, this will be the end of our Democracy.