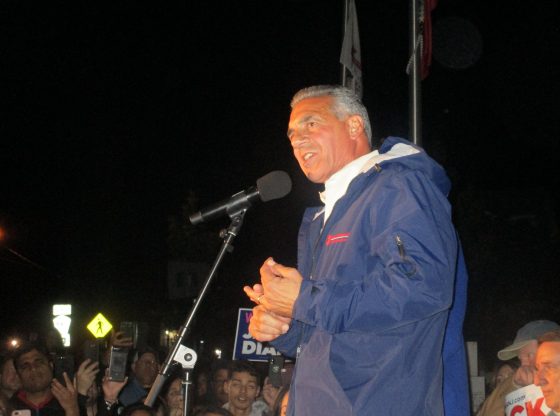 RARITAN – N.J. – Republican gubernatorial nominee Jack Ciattarelli finished Election Eve just 200 yards from where he got his start. He spoke Monday night on the north bank of the river that shares this suburb’s name. Just blocks away, the CPA and former state lawmaker grew up in the home of working-class parents who, in turn, were the children of Italian immigrants who arrived in Somerset County a century ago.

“We’re delivering a win for New Jersey!” Ciattarelli told a cheering crowd of about 300 sign-waving supporters in a park beside a street full of Victorian clapboard houses. The crisp, clear, cool evening was quintessentially autumn with a breeze just stiff enough to flap nearby flags and fold the arms of less hardy fans.

“Guys,” Ciattarelli said, “He could bring in the ghost of FDR. We’re winning tomorrow!”

“Number two. Create more jobs,” through a more pro-enterprise environment. “Under Governor Ciattarelli, New Jersey will not be the worst place in America to run a business.”

“Number three. I will go down to Trenton and get my hands around the monster of state government.”

“Number four. Let me be clear: I and my attorney general will back the men and women in blue, every day of the week.”

“Number five: Back to basics in our public school system. We’re going to leave all that other stuff that Phil Murphy has forced around us to the home, between parents and their children, around the kitchen table.”

Jack, as his placards so simply call him, was poised, relaxed, and surprisingly funny. He amused his followers with a story about his mother, 89, who did not endorse him until last week. Evidently, she was sore about him telling an audience 22 months ago, at his campaign’s launch, that his parents shared just one high school degree between them. Mrs. Ciattarelli did not want people to think that she and her husband were ignorant and uneducated. “Damn it,” she said. “I want people to know, I was the one with the high school diploma.”

“Jack has extraordinary energy and optimism,” said Tom Kean, Jr. State Senate Republican leader. “He’s got the ability to do the job. He knows how to tackle it from Day One because he grew up in New Jersey. He’s got private-sector experience. He’s had public-sector experience. And he knows how to pull people together on a vision. He’ll tackle the property-tax problem and the affordability crisis we’re facing, and he’ll be very aggressive about it.”

Sharon Lukac also was pleased with Ciattarelli’s speech. “Love it, 100 percent,” she said. “Back the Jack. Yes!”

What’s the best thing he can bring the people of New Jersey?

Jack observed just how close races like his can be.

“Republican Tom Kean, Sr.,” Jack said. In his first bid for governor: “Three million votes were cast. He won by 1,797 votes. Let us not wake up the morning of Wednesday, November 3, having lost by 1,797 votes. Let’s get this done!”