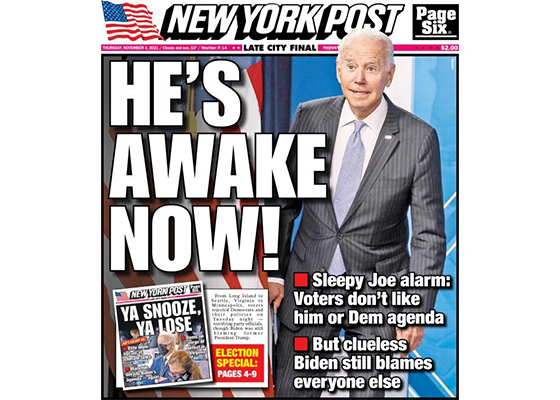 From the White House to school boards across America, voters on Tuesday screamed at Democrats: “No!” to reckless spending, meddlesome bureaucrats, bear hugs for criminals, racial fetishism in classrooms and beyond, soaring energy prices, a monthly-average of 179,779 illegal aliens invading the southern “border” on President Joe Biden’s watch, and much more.

In New Jersey, Republican Jack Ciattarelli led Democrat Governor Phil Murphy by a breathtaking 61 votes early Wednesday morning. The race stands at Ciattarelli 50.8 percent to Murphy’s 48.5 percent, with the Republican not conceding amid ballots yet uncounted and reported anomalies in Bergen County. Whatever happens, a former GOP state assemblyman was not supposed to get thisclose to a Democrat governor of a state that Biden won by 16 points.

Statewide, liberal proposals to include illegal aliens in redistricting, inflict same-day voter registration, and expand no-excuse absentee voting all went up in smoke.

In Minneapolis, birthplace of the defund-the-police movement, one of the Left’s ugliest babies was strangled in its crib. A ballot measure to “reimagine” the 70-percent Democrat city’s police force into a touchy-feely Department of Public Safety crashed and burned — 57 percent No, 43 percent Yes.

If Democrats were smart, they would remember that HillaryCare and other Leftist excesses cost them the House in 1994. President Bill Clinton “triangulated,” steered sharply toward the center, and helped Speaker Newt Gingrich (R- Georgia) reduce capital gains taxes and reform welfare.

Alas, too many Democrats are dumb. Speaker Nancy Pelosi (D – California) appears hellbent on pushing Biden’s $1.75 trillion (per Penn Wharton: $3.98 trillion) Build Back Better tax-hike, welfare, and red-tape colossus. She and other socialists argue that Democrats got clocked Tuesday for not being Leftist enough. Will Pelosi and her party wise up or will they keep torturing the American people?

Stumping for McAuliffe in Norfolk, Vice President Kamala Harris said: “What happens in Virginia will, in large part, determine what happens in 2022, 2024, and on.” It would behoove Democrats to reimagine last week’s battle cry as a cautionary tale.

Deroy, always spot on! Love him.

yes for sure all of these DAMOCRAPS certainly belong behind bars and being lined up for the grand march to the firing squad wall. this is the most stupidest bunch of idiots that has ever been turned lose on this. country of these idiots want communism move to the country CHINA JOE loves . as long as it is not this one. and no return policy . just go be gone or go to prison and a firing squad. these idiots deserve it over and over again . for covering crimes in humane treatment to Americans ruining OUR COUNTRY lying to the public lying everytime their mouth opens. hillary oblama peeeelousi AOC ILHAND they are all included just like Schumer those lying FBI CIA NSA. every single one of them should be given a option leave the country and never return or face the shot between the eyes.

globalists and their puppets $oro$ and barry soetoro and chester biden appointed all the correct criminals to the correct positions to protect all their criminals .

Yes folks, the world isn’t coming to an end, but Republicans around the country are finally waking up and smelling the coffee. Isn’t it about time that people, no matter their party should stand up for their own rights? Why spend money on non necessary projects when we have so many areas that need the attention of the leaders of our country, state, and local governments.
I don’t care what party you vote for, but it should be evident to even a monkey that spending money that you don’t have is very poor management and must be brought to a halt.
As I once heard “I STILL HAVE CHECKS IN MY BOOK SO I STILL MUST HAVE MONEY”, We can’t keep spending our children’s and grand kids futures away, they will never be able to reduce the trillions of $$$ that are being spent today for non necessary projects when there is no money to pay for it. Borrowing for today won’t help us tomorrow…

globalists and their puppets; $oro$ and chester biden and demonrats and rinos always spend so that the majority of their wasteful spending ends up in their private bank accounts .

Racist globalists and all their racist puppets; $oro$ and chester biden and demonrats and rinos and media and libby snow flake sheep that try to make Americans believe that they are the racists for refusing globalist agendas .

I believe every school should have a class that teaches the facts of socialism. Start with equity in grades. Average all students grades together and give everyone the same grade. Let them see how long before everyone gets a failing grade. The problem with socialism and equity is the lazy won’t work and the industrious soon finds out there is no profit in hard work.

You’re so awesome! I don’t believe I have read a single thing like that before. So great to find someone with some original thoughts on this topic. Really.. thank you for starting this up. This website is something that is needed on the internet, someone with a little originality!