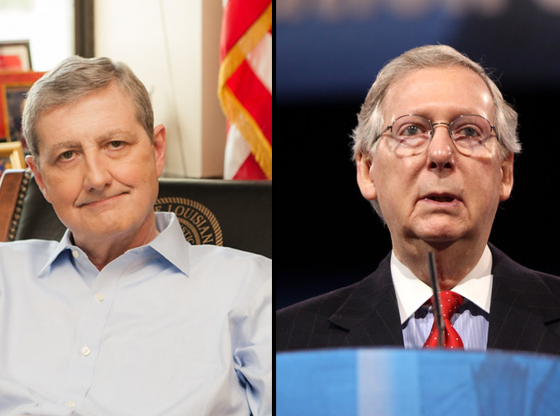 Scientists have yet to create a perpetual-motion machine. However, the perpetual-quotation machine has been invented and is functioning beautifully. His name is John Kennedy, and he should become Senate GOP leader.

The Louisiana Republican is a priceless media resource. When a journalist needs a colorful observation on current events, Kennedy delivers more swiftly than FedEx.

Kennedy once said the Senate “is like high school, but nobody ever graduates.” He described a superficial “fix” to ObamaCare as “putting paint on rotting wood.” He is no fan of House Speaker Nancy Pelosi. He said about the California Democrat: “I don’t mean any disrespect, but it must suck to be that dumb.”

Kennedy spoke with Fox’s Maria Bartiromo on Sunday in a combination interview and stand-up comedy routine.

Referring to the Build Back Better Act, Biden’s $2.4 trillion to $4.8 trillion gateway drug to American socialism, Kennedy said, “The only way I know how to improve that is with a shredder. It’s going to fuel inflation. When a Hot Pocket costs you $10, remember, we’re building back better.”

“In 2020, you wrote another paper called ‘The Climate Case for a National Investment Authority,’ where you said: ‘What we need to do to the oil and gas industry is have the federal government bankrupt them, so we can tackle climate change.’…I don’t know whether to call you professor or comrade.”

Kennedy chided Biden for naming a slew of other far-Left fanatics to federal agencies, such as First Amendment foe Gigi Sohn, now under scrutiny for a seat on the Federal Communications Commission. “I think they are one of the reasons that President Biden’s poll numbers are on a journey to the center of the Earth,” Kennedy quipped. “‘Be yourself’ is the worst advice you can give some people. And so many of President Biden’s nominees are just barking mad.”

Kennedy described Biden’s picks as “crypto-socialists.” He added: “They’re fanatical. I mean, if you ask them to consider another point of view, their neck veins bulge, and they call you a Nazi or a racist. We try to question them in committee. But they don’t answer the questions. They just refer you — excuse my language — they just refer you to bullshit.com.”

Kennedy urged Biden to restore sanctions on the Nord Stream 2 natural-gas pipeline: “We will get Russia down, and then we can choke them.”

Kennedy is a solid, if not rigid, conservative with twin 84 percent lifetime ratings from the American Conservative Union and the Club for Growth, with both of which I have collaborated for years. Beyond being reliably hilarious, the University of Virginia lawyer and Oxford University graduate also is a sharp interrogator in oversight hearings, as assertive as a Mardi Gras Indian, and suitably defiant of authority.

For his next act of defiance, Kennedy should topple the exhausted chairman of the Senate Cave-in Caucus, Kentucky’s Mitch McConnell (ACU 87; CFG 74). In yet another milquetoast milestone, the Senate’s Republican “leader” swallowed Democrats’ pending-default lies, and agreed this week to help Democrats raise the federal debt ceiling. In exchange, McConnell got…absolutely nothing. This is precisely what he pledged not to do, in a now-meaningless October 8 letter to President Joe Biden.

Yes—-PLEASE. PLEASE,PLEASE
HE WOULD BE GREAT!!!!

I’M IN AGREEMENT! I HOPE HE DOES HE WOULD BE PERFECT!

McConnell made millions with his wife as Secretary of transportation with her family’s shipping business in Asia. He says one thing then votes with Democrats, he turned on Trump during the disputed rigged election joined the democratic global Communist party pieces race baiting pieces of worthless lying human shit in congress as the majority illegally. The most disliked GOP member of the senate the minority party leader. So full of shit he staring to turn brown and looks like a huge Hersey kiss candy. If inky he would return and go enjoy life with the money he stole and cut us a break.

Yes, John Kennedy is the Perfect Choice for the Senate GOP Chief. I have stood all i can stand of McConnell and i can’t stand no more.

McConnell has to go. He always gives in and gets nothing for it.
This Dem party we cannot compromise with. Everything they propose is set to take America down.

As far as I’m concerned he’s hired. Can he start on Monday.

God, common sense in an elected official! Senator Kennedy has not been infected with “DC swamp fever” and truly represents the PEOPLE that sent him to DC to do that task. Senator McConnell seems too willing to sell us all out and his TDS is so prominent that it glows!

If he ever gets out of politics his fame would be a durn good comedian !!! Would pay to see him in action on stage !!! What a great sense of humor and a way with words !