Up, Up, and Away: Biden/Democrat Policies Drove Gas Prices Sky-High Before Putin Attacked Ukraine 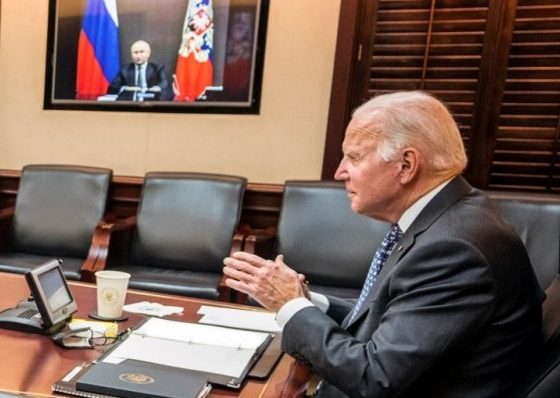 President Joe Biden and prominent Democrats blame Vladimir Putin’s invasion of Ukraine, alleged oil-company collusion, and even COVID-19 for today’s sky-high gas prices. They refuse to take responsibility for this monumental mess of their own design.

Revealing either an Olympic-grade lack of self-awareness or a perjury-strength talent for lying, President Biden said: “It’s simply not true that my administration or policies are holding back domestic energy production.”

While running for president, Biden repeatedly promised to do exactly this.

“Would you close down the oil industry?” moderator Kristen Welker asked Biden in the October 22, 2020, presidential debate. He replied: “I would transition from the oil industry. Yes.”

From Day One, Biden and the Democrats’ actions and statements pushed gasoline prices steadily higher.

February 25, 2021: The U.S. Senate confirmed Energy Secretary Jennifer Granholm. She previously said, “We ought to be doing everything we possibly can to keep fossil fuel energy in the ground.” ($2.63)

April 22: Biden unveiled a “Climate Finance Plan” to “promote the flow” of capital “away from high-carbon investments.” ($2.85)

July 11: Treasury Secretary Janet Yellen said that she expects multilateral development banks to “discourage new investments in fossil fuel-based power generation except where other options are not possible.” ($3.12)

September 23: Biden nominates Soviet-born and educated Saule Omarova as Comptroller of the Currency. She had said of oil and gas companies, “We want them to go bankrupt.” She also stated: “The way we basically get rid of those carbon financiers is we starve them of their sources of capital.” Drowning in controversy, Omarova eventually yanked her name from consideration. ($3.18)

January 31, 2022: Reuters reported, “The Biden administration will raise the royalty rate that drilling companies must pay on oil and gas leases it plans to sell in the first quarter.” ($3.37)

February 28: Team Biden announced that it would accept a federal court’s rejection of its few drilling-lease sales. ($3.60)

Gasoline prices climbed 48.3 percent between Biden’s inauguration and Putin’s invasion. This week’s average gallon of regular hit a record $4.31, up 81 percent under Biden. While Putin’s barbarism has helped elevate pump prices, he merely has heightened the pain that Biden and Democrats already had perpetrated against the American people.

Deroy Murdock is a Manhattan-based Fox News Contributor, a contributing editor with National Review Online, and a senior fellow with the London Center for Policy Research. Michael Malarkey contributed research to this opinion piece.

“National Climate Advisor Gina McCarthy entered office. She once said, “I want fossil fuels gone. I want fossil fuels out of products”. That’s how utterly stupid all of Brandon’s appointments have been. Almost everything now is petroleum based to some degree. To end it would be to go back to the dark ages. That’s where democrat brains reside anyway.