Biden Lies Through His Bright-White Teeth on Gas Prices 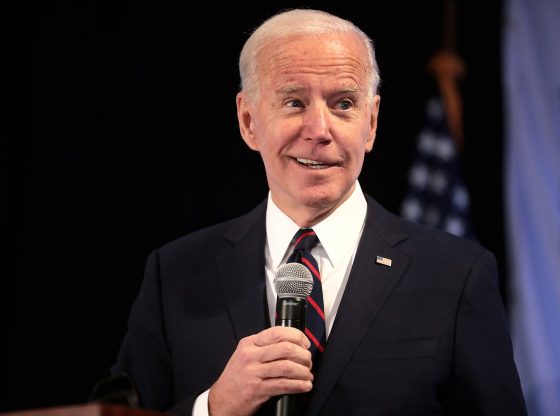 Gage Skidmore from Surprise, AZ, United States of America via Wikimedia Commons
BY: Deroy Murdock | News,Opinion |
President Joe Biden and his Democrat pals must consider the American people total dimwits.
Their efforts to blame Russian dictator Vladimir Putin for the rocket-launch-like rise in fuel prices is at best laughable. At worst, their deceitful buck-passing is deeply insulting to the nation that they purport to lead.
Biden, White House Press Secretary Jen Psaki, and other regime mouthpieces repeatedly refer to the “Putin price hike,” as if gasoline prices were flat until Russia brutally and needlessly attacked Ukraine.
On March 13, House Speaker Nancy Pelosi (D – California) said that inflation “starts with Putin.” What about the massive government expenditures that Pelosi, Biden, and their socialist comrades have inflicted on America under unified Democrat rule? According to Pelosi, this tsunami of outlays has made things better. “The government spending is doing the exact reverse, reducing the national debt,” Pelosi explained. “It is not inflationary.”
One wonders which economic texts Pelosi read in college, if she ever has perused any such books.
If the cost of gasoline suddenly soared as Russian tanks rolled across the Ukrainian frontier, Biden and the Democrats would be on solid ground. Alas, for them, they are stuck in quicksand.
The event that set gas prices on their upswing was not Russia’s invasion on February 24, 2022. It was Biden’s inauguration on January 20, 2021.
Within hours of his taking the Oath of Office, Biden canceled the Keystone XL Pipeline. This signaled the beginning of the end of President Donald J. Trump’s amazing accomplishment: US energy independence and America’s status as a net-exporter of energy for the first time since 1953.

The average national price for a gallon of regular gasoline stood at $2.39 as Biden said, “So help me God.” When Putin began his rape of Ukraine, that price was $3.54 — up 48.1 percent.
Gas prices averaged $4.26 on Saturday — another 20.3 percent higher since Russian boots hit Ukrainian soil and up 78.2 percent on Biden’s watch.
So, of the gas-price increase on Biden’s watch, 57.9 percentage points of it were there before Russian tanks breached the Ukrainian border.

Biden bears responsibility for nearly 60 cents of every dollar in higher gas prices since he became president of the United States.
The overwhelming evidence goes beyond a shadow of a doubt: “Putin’s price hike” is garbage. Gas prices have crept up throughout Biden’s term, not just since Putin penetrated Ukraine.
Let’s go, Brandon!
Biden’s fingerpointing is too much, even for some Democrats.

“He [Biden] was saying, you know, everything is Putin’s price hikes, inflation is Putin’s fault.” Obama-Biden strategist David Axelrod said Tuesday, on his “Hackon Tap” podcast. “People don’t believe that either. They know that they had inflation before this. They know that gas prices were high before this. They haven’t dialed this in quite right yet. You can’t blame everything in the economy on Putin.”

Responding to February’s report of 7.8 percent year-on-year inflation, Obama-Biden economic aide Steve Rattner said via Twitter: “Well, no. These are Feb #’s and only include small Russia effect. This is Biden’s inflation and he needs to own it.”

When even his prominent Democrat allies call Joe Biden out for his relentless deception, it’s well past time for him and his hacks to stop lying to the American people.

Another solid contribution from Mr. Murdock. I applaud him. Inflation is Biden’s responsibility along with his Democrat comrades.

There is an old saying that goes “If it ain’t broke – Don’t fix it”. I guess Brandon has never heard that one. It is the same ol’ same ol’ for the Democrats in D.C. create problems that did not exist and then raise taxes to “fix” them.

Biden hasn’t told the truth his whole life……Pelosi either. Shameful and sickening. Pay day will come soon enough …… maybe not of this world but the next.