Joe Ravi [CC BY-SA 3.0 (http://creativecommons.org/licenses/by-sa/3.0)], via Wikimedia Commons
BY: Deroy Murdock | Opinion |
The United States Supreme Court is on the verge of vacating the 1973 Roe v. Wade decision on abortion, according to a draft opinion leaked to Politico.
Say whaaaaaaaaaaaaaaaaaaaaaaaaaaaaaaaaaaaaaaaaat?
A SCOTUS opinion leaked to journalists before its release to the public?
Love or hate whatever the Court eventually does on Roe, every American should hate the fact that the U.S. Supreme Court, of all places, is now a source for press leaks — as if it were a congressional office, the West Wing, or some federal agency awash in intrigue and bitter rivalries.
Not to be outdone, the Democrat Left immediately exploited this leak, as if they expected it. Activists sprang up late Monday night, screaming in front of the Supreme Court. Liberal groups began cranking out fundraising appeals. And Senate Democrats, on cue, renewed their demand to dump the filibuster, perhaps to pack the Court and rescue Roe.
While a decision on the controversial abortion ruling likely would have emerged in late June, as the most contentious decisions typically do, this May 2 leak gives the Democrat Left nearly two full bonus months to harvest this issue for votes and campaign cash.
Also, this noxious surprise is a perfect way to change the subject from — among countless things — President Joe Biden’s thickening mental fog bank, the worst inflation since 1982, rising fuel prices, 42 suspected terrorists captured on the southern frontier, and the brand-new Disinformation Governance Board or, ominously, the DGB.
This leak is one of the most naked and revolting domestic power grabs in memory. Thank you, Democrats!
And, in an institution that virtually worships precedent, nothing like this seems to have befallen the nation’s highest court since it first convened on February 1, 1790.
“In over two centuries of our nation’s history, this has never happened,” Senator Ted Cruz (R – Texas) told Fox Business Network’s Stuart Varney Tuesday morning. “This is as corrosive, as destructive to the Supreme Court, as we’ve ever seen.”
“What it means is that there was some angry Left-wing law clerk who breached the trust to his or her justice, who breached the trust of the Supreme Court, who breached the trust of the American people, and took a first draft of an opinion and decided to leak it to everyone,” Cruz continued. “This is the consequence of the Democrats’ rabidly partisan effort to undermine the Court, to attack the Court.”
“This is part and parcel of Chuck Schumer standing on the steps of the Court and threatening the justices saying, ‘You will reap the whirlwind,'” Cruz added. “This is part and parcel of the effort by Democrats to pack the Supreme Court. And this is part and parcel of the effort of Democrats, partisan Democrats, to try to tarnish and attack Justice Clarence Thomas, in particular. They’re smearing him. And, I gotta say, Democrats have a lot to answer for — the destruction that this wreaks on the Court because it will carry on, potentially forever, limiting the ability of the justices to do their solemn constitutional responsibility. It really is an outrage.”
Hans Von Spakovsky, Senior Legal Fellow at the Heritage Foundation told me: “This is a shocking breach of the confidentiality of the work done at the Court. It is highly unethical, unprofessional conduct. The individual who did this needs to be fired and disbarred, if it is a lawyer such as one of the law clerks, which seems likely. This was clearly done by a liberal radical at the Court to intimidate and coerce justices to vote the way that individual wants them to vote. The culprit needs to be prevented from ever practicing law.”
“As far as I know, no significant decision has ever been leaked to the press before its release,” U.C Berkeley law professor John Yoo told me. “It is a sign to me of how badly abortion has politicized our court and constitution that there are those who so clearly disagree with overruling Roe that they would undermine one of the most important institutions in our government.”
Don’t be surprised if Left-wing mobs soon hound Supreme Court justices — at their homes, in their cars, and at their restaurant tables, to demand that they preserve Roe v. Wade — much as Leftists bullied Senator Joe Manchin (D – West Virginia) and chased Senator Kyrsten Sinema (D – Arizona) into a public restroom, to scare them into supporting Biden’s extremist agenda.
This stomach-turning episode proves that there is no depth to which the Left will not burrow to get what it wants — norms, institutions, and laws be damned.
As if America needed further evidence, this episode confirms why voters this November need to pry the car keys out of Democrats’ fingers and guarantee that they never, ever get their hands on them again.
Black Success Demolishes the Left’s Go-to Racism Lie
Deroy Murdock Appears on ‘Varney and Company’ To Discuss VP Harris, Education 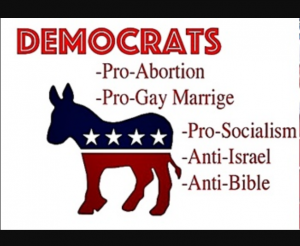 Yes, Mr. Murdock. This evil manipulation to undermine the Court in support of mob rule is tantamount to sabotage and TREASON and should be dealt with accordingly. God rot the DemonCrat Socialists.

[…] as many theories as people offering them, to say: why did they do it? Did the people involved seek to intimidate the Court or some of its members? Or did they seek to galvanize their fellow leftists into voting […]